Twisted Sisters started as a one-shot published by Last Gasp in 1976 after Aline Kominsky and Diane Noomin had a disagreement with the Wimmen's Comix collective. Noomin later used the title again for a paperback collection of women's underground and alternative comics, published for mainstream audiences by Penguin Books in 1991. The success of that book encouraged Noomin to pitch another book of new material to Kitchen Sink Press publisher Denis Kitchen. Kitchen agreed, but for cost reasons, he published the material in four issues before collecting them into a paperback. The series and collection were published in 1995.

This article is a stub. You can help Women In Comics Wiki by expanding it. 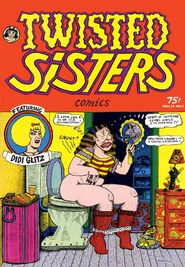 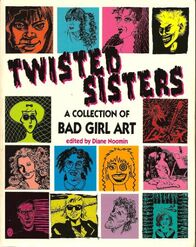 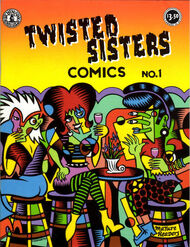 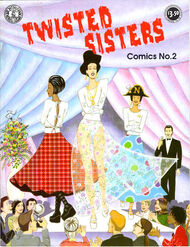 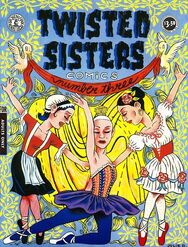 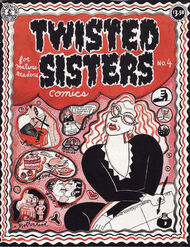 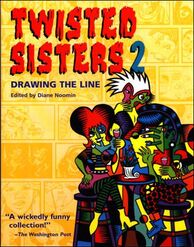 Twisted Sisters 2: Drawing the Line is a trade paperback collection of four issues edited by Diane Noomin, published by Kitchen Sink Press in 1995.

The Introduction is written by noted "sexpert" Susie Bright.

Featured artists from Twisted Sisters anthologies
Both Twisted Sisters trade paperbacks were promoted with exhibitions. In November 1991, the first volume's exhibition was held at La Luz de Jesus Gallery in Los Angeles, California. The opening reception was taped by Adam Alexander, Leslie Sternbergh's husband, and is available to watch on the Internet Archive and YouTube.

Retrieved from "https://womenincomics.fandom.com/wiki/Twisted_Sisters?oldid=20046"
Community content is available under CC-BY-SA unless otherwise noted.