Women In Comics Wiki
Register
Don't have an account?
Sign In
Advertisement
in: Wonder Woman, American creators, Writers,
and 11 more

Trina Robbins (born August 17, 1938) is an American comics artist, writer and "herstorian". She was an early and influential participant in the underground comix movement, and one of the few female artists in underground comix when she started.

Robbins started drawing at a young age. Her mother, a second grade schoolteacher, taught her to read at the age of four, and soon she was reading all the books and comics she could find. When she was a teenager, her mother convinced her to give away her comic book collection, which she later described as, "an amazing collection. It could have put me through college."[1] She started attending Queen's College in New York right out of high school and majored in English, but dropped out after a year. After Queens College she attended Cooper Union art school, again dropping out after a year. She became an active member of science fiction fandom in the 1950s, and her illustrations appeared in science fiction fanzines such as the Hugo-nominated Habakkuk. She got back into comics in the late 1960s when the Batman television show and the proliferation of Pop Art made comics interesting to young hippies. She also started drawing psychedelic images with magic markers for fun. When she was introduced to the East Village Other underground newspaper, she was inspired by a psychedelic comic by "Panzika," who she later found out was a woman, Nancy Kalish.

As she got more and more into comics, in 1970 she moved back out to California to San Francisco with a car-full of other underground cartoonists; soon after arriving, they were joined by Willy Mendes, with whom she had worked on EVO publication Gothic Blimp Works. She found the San Francisco comic scene unwelcome to women cartoonists, finding herself introduced at the parties she was rarely invited to as "Trina...a dressmaker."[1]

She worked at the feminist underground newspaper It Ain't Me, Babe. She subsequently established the first all-woman comic book titled It Ain't Me Babe Comix. She became increasingly involved in creating outlets for and promoting female comics artists, through projects such as the comics anthology Wimmen's Comix.

In the 1980s, she started working for mainstream publications such as National Lampoon and Playboy, in addition to a six-issue miniseries called Misty for Marvel's Star imprint. She also worked on an adaptation of Sax Rohmer's Dope for Eclipse Comics. Robbins also designed Vampirella's costume for Forrest Ackerman and Jim Warren.

In the mid-'80s through the 1990s, she undertook the task of "herstorian," chronicling the history of women comics creators and cartoonists in her books Women in the Comics (with Catherine Yronwode), A Century of Women Cartoonists (later updated as The Great Women Cartoonists) as well as a biography of Nell Brinkley. She said of her non-fiction projects:

In the 21st century, she collaborated with artist Anne Timmons on GoGirl! about a teenage superhero who inherited her flying powers from her superheroine mother for Image Comics. She also wrote the first story arc for Moonstone's Honey West, based on the '60s TV series of the same name. She has primarily been a scripter of graphic novels during the 21st century, and her most recent work is a graphic biography of Lily Renée, drawn by Timmons.

She lives in San Francisco with her long-term partner, comic artist Steve Leialoha.

She won a Special Achievement Award from the San Diego Comic Con in 1989 for her work on Strip AIDS U.S.A., a benefit book that she co-edited with Bill Sienkiewicz and Robert Triptow.

In March 2013, she was the keynote speaker at the A Comic of Her Own academic conference at the University of Florida. At San Diego Comic Con 2013, Robbins was inducted into the Will Eisner Comic Book Hall of Fame, only the fourth woman to date.

She is the first of the three "Ladies of the Canyon" in Joni Mitchell's classic song from the album of the same name.

A Century of Women Cartoonists (1993) 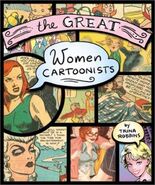